I’m starting a project: a medieval – inspired page of the boring prophet from The Life of Brian. I’m quite excited!

This isn’t the final piece… I’m nowhere near happy with my blackletter yet, but it’s a good starting place for layout and testing out illumination.

I’ve started learning Copperplate this past week. Copperplate is what most people will think of when they imagine calligraphy – it’s swooshy and beautiful. What I love most about it is the contrast between the fine hairlines and the shades (the fat lines).

It will take a bit of practise to get beautiful consistent letters, but I’m enjoying the learning process a lot! I’ve written 28 pages of practice so far… I’ve had the new nibs only five days! I guess that speaks for how much I’m enjoying this! I’m rather fortunate at the moment that I have so much time to spare for practising.

I purchased the nibs from Scribblers.co.uk, and unfortunately I’ve already broken one. It was my favourite of the two, so I’ll have to order more than one of each next time. It really is interesting noting the differences between the nibs – I really liked the Gillott 303, which gave super fine hairlines and felt really flexible, compared to the Gillott 404. The 404 is slightly larger but also stiffer, which means the difference between hairline and shade is smaller, so it doesn’t look as striking. I’ll also order a couple of different nibs next time. I’ve heard the Leonardt Principal is a delight to write with, and I’m generally quite excited to try different nibs.

One thing I was very curious about trying was the oblique holder – would it be significantly different to using a straight penholder? The answer? Not really. The pointed nib requires use of pressure for the shades, which actually feels quite natural. Added to that, the writing paper isn’t held straight like I was taught for broadnib, but turned to match the angle you’d naturally hold the penholder in. I find my arm doesn’t tire as easily as with broadnib calligraphy.

I bought some metallic ink along with the nibs and holder, and I’m saving it for when my copperplate is at an acceptable level. The gold is just perfect. My first project will be to write out mine and Tony’s wedding vows! I almost can’t wait – but I know if I just go ahead and start, I’ll notice the imperfections later. At the very least I can think about composition now! 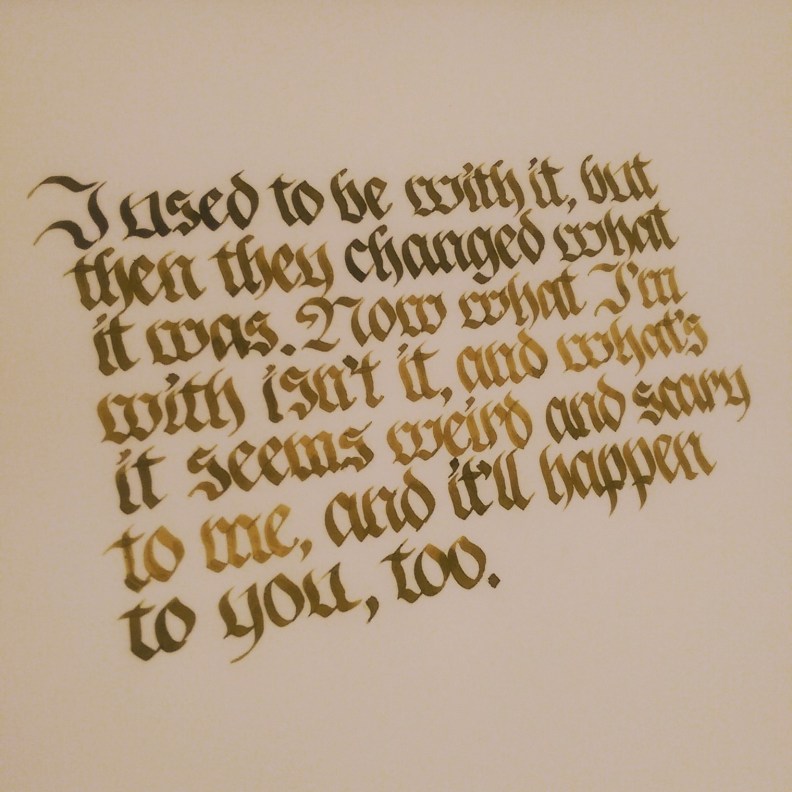 I really love the blackletter look, although I’m in dire need of more black ink! I spent a few hours this weekend on Fraktur, working on my favourite Grandpa Simpson quote, as well as the Night’s Watch oath from A Song of Fire and Ice. 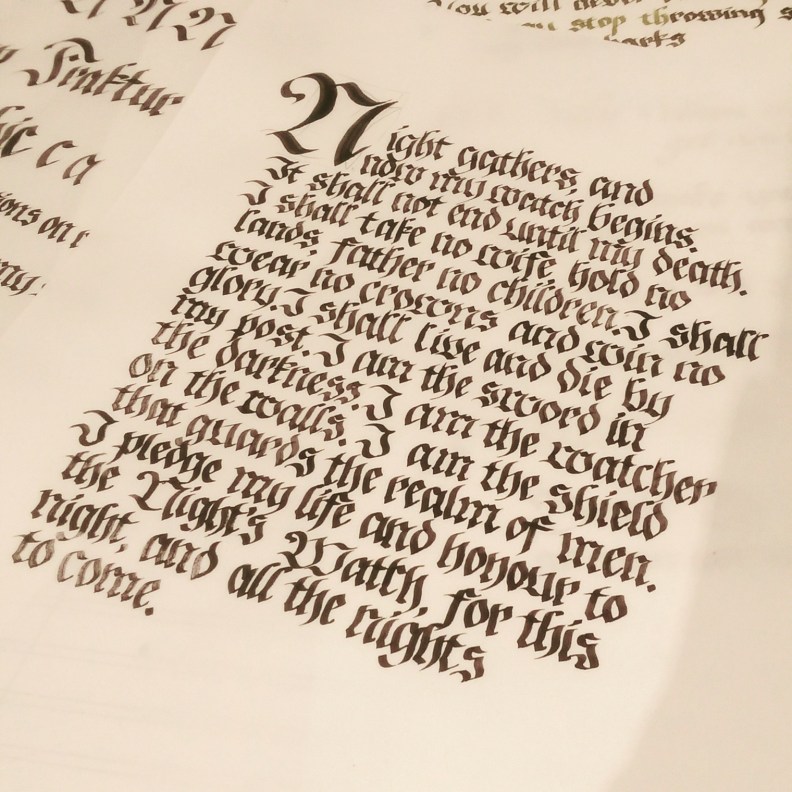 I did a small piece on request a few days ago, and it got me very inspired to pick up the pens again.

I use both dip pens and Pilot Parallels. At the moment I prefer the dip pens for their natural look, but the Parallels are very good for their versatility. All of these, except Favourite, were written with a dip pen.